I recently published a report on how stop and search is used in London. Although the report contained lots of information, it was probably inevitable that people would focus on the figures for disparities in stop and search rates between ethnic groups. This has led several people to ask how I calculated these disparities, so I’ll set that out in this tutorial.

First, we load the tidyverse R package, which contains various functions for handling data and the scales package for formatting numbers.

To calculate search rates we need data on searches and data on population. The holy grail of population data would be an accurate representation of the number of people available to be searched in a particular place, since a person in a public place is vastly more likely to be searched in relative terms than someone sitting watching TV in their kitchen. Unfortunately, this data doesn’t exist, so we have to rely on residential population data. As I discuss in the report, this is not perfect, but it is probably acceptable if we calculate search rates for London as a whole, rather than particular neighbourhoods.

Search data is available from data.police.uk but is unfortunately stuck behind a web form, meaning it is difficult to download directly within an R script. I’ve instead downloaded the stop-and-search data for the Metropolitan Police for July to September 2020. This is slightly different to the data I used for the report, which also included stops by the City of London Police and British Transport Police in London, but almost all searches in London are done by the Met, so this is unlikely to affect the results much 1.

This gives us a data frame where each row represents a stop and search of one person or vehicle. The first few rows:

Population estimates for London for 2020 are available on the Mayor of London’s website. These are only estimates, but are probably the best figures available because the latest census data are now nearly a decade out of date. We won’t get a more-accurate measure of London population until data from the 2021 Census is published in 2022 or 2023.

We now load the population data and format it so that it is easier to work with.

This gives us a data frame where each row represents the number of residents in London in each category of age, sex and ethnicity. Again, the first few rows:

We must also count the number of people in each population group, since in the raw data there is a separate row for each individual year of age. We also aggregate ethnicity categories to match those in the search data.

Now that the two datasets are in the same format, we can merge them to create a single dataset to work with.

The first few rows of data are:

Now we have data we can work with, we can calculate search rates per 1,000 people in a particular population group and for the population as a whole. Note, however, that some demographic groups have very small numbers of searches so the calculated rates are likely to be unstable. To deal with this, we will only calculate rates for groups for which there were at least 100 searches between July and September 2020. We will also exclude the ‘Other’ ethnicity category, because it covers such a broad range of different people that it is difficult to interpret the results.

We could show these values as a table, but there would probably be too much information to easily digest. Instead we can show the different search rates as a chart (remember some values will be missing because there were fewer than 100 searches of people in that group). 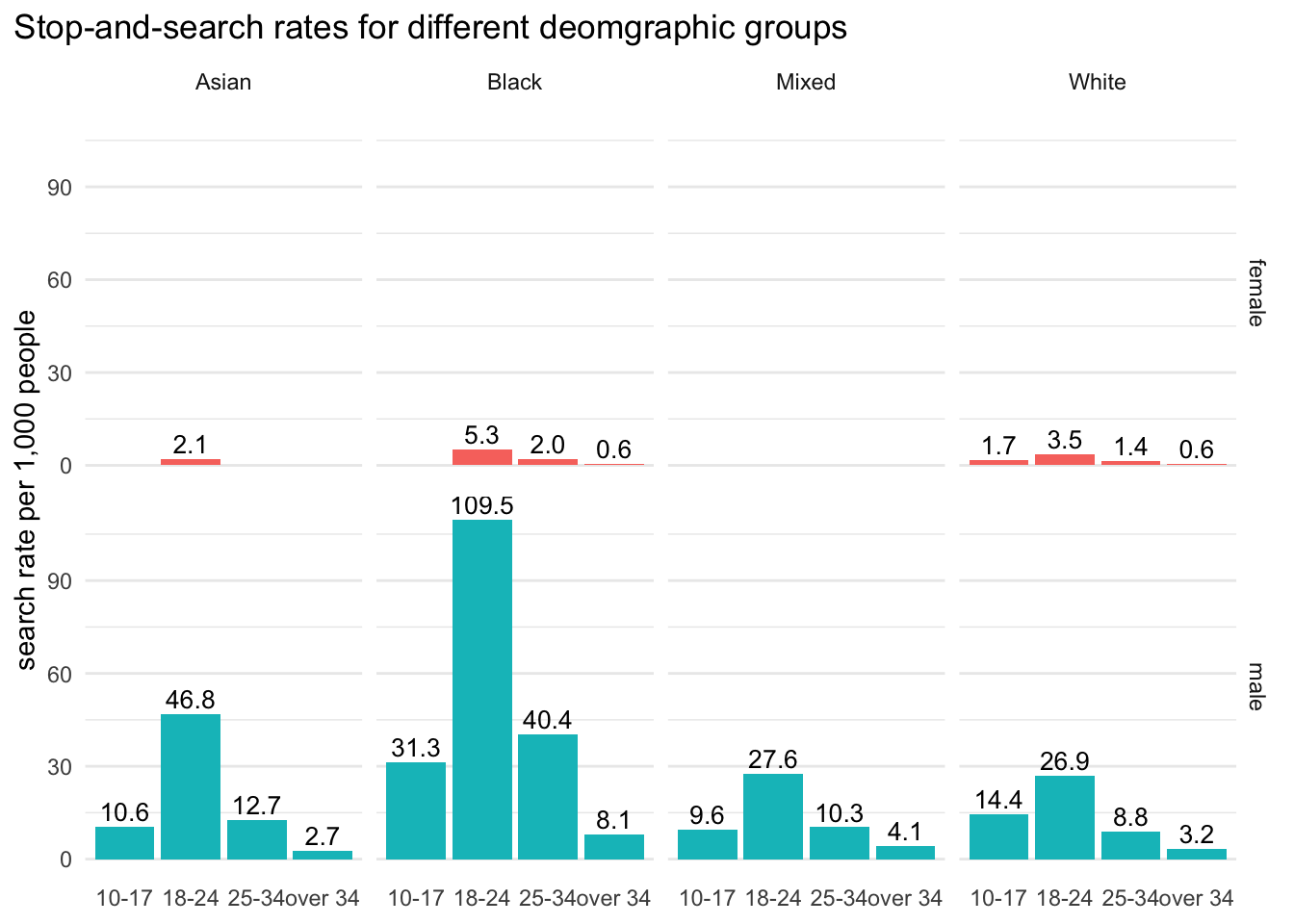 To calculate disparity ratios, we simply divide the search rate for each group by the overall search rate of 6.20 searches per 1,000 people.

These disparity ratios are slightly different from those in last week’s report, because the data used here are only for the Met, not the data for all three London police forces used in the report. Nevertheless they are similar overall, and in particular the ordering of the groups from highest to lowest is almost identical.

For some purposes, comparing specific age/sex/ethnicity groups to the population as a whole may not be of interest. For example, we might be interested in comparing people in non-white ethnic groups to white people of the same age and sex. To do this, we have to arrange our data frame into a different format so we can divide the search rate for each group by the corresponding rate for white people.

We can visualise these standardised disparities.

Comparing every group to every other group

I’ve had a request to calculate disparity ratios for every group in comparison to every other group. I’m not sure this is necessarily valuable, but I’m including the following code in case it is useful to anyone else. The results are saved in an Excel workbook.

Disparity ratios are a common way of looking at how stop and search affects different groups in society. They are by no means perfect, since different people (and groups) might experience the same treatment in different ways for all sorts of reasons. Disparity ratios also do not explain why different groups are searched at different rates. I discuss these issues in more detail in the report, which you can download to read for free.